Last week’s ISMIR 2008 conference on music information retrieval was another grand success. It was great to meet several people who I had only corresponded with before on the MusicXML developer mailing list, including Geoff Chirgwin, Joachim Ganseman, and Phil Kirlin. There was plenty to catch up on with friends and colleagues, and meeting new people doing all sorts of interesting things.

I gave a demo on Using MusicXML 2.0 to Create Symbolic Music Data Sets, and Phil Kirlin was kind enough to take this picture of the demo setup: 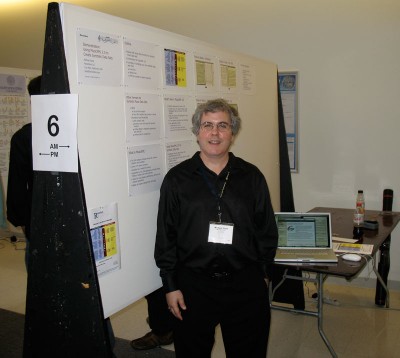 There were more people using MusicXML technology at this year’s ISMIR than ever before. Here is what I saw, with apologies for anyone I may have overlooked. Please leave a comment so I can fix any omissions:

This entry was posted in MusicXML, Software, Travel. Bookmark the permalink.