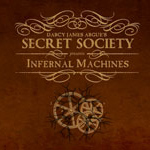 Infernal Machines, the debut album from Darcy James Argue’s Secret Society, is my favorite jazz album of the year. Here is a big band album that engages popular music in ways that have been largely lost since the 1970s, and does so with great beauty and sophistication.

Argue refers to the Secret Society as a steampunk big band. I hadn’t heard of steampunk before this, but I see now how that’s an apt analogy. Another shorthand description might be Maria Schneider meets Michael Gibbs. Neither of those capture the individual personality, of course, but you can hear that in the music – there are plenty of free downloads available at the Secret Society site.

One thing I find particularly refreshing about Argue’s writing is its avoidance of the layered orchestration cliches common to most big band music. If you read the previous Herb Pomeroy post and want to hear what it sounds like when a big band composer really likes to rub color against color, this is the album for you! Argue studied with Bob Brookmeyer. While you can hear the influence in the approach to orchestration, I find Argue’s music has a whole different aesthetic from Brookmeyer’s.

In addition, Argue is a music copyist who has made some very helpful contributions to improving jazz support in our Dolet for Finale plug-in.

This coming Thanksgiving week in New York is a slice of big band heaven – Argue’s Secret Society performs at Iridium on Wednesday, and the Maria Schneider Orchestra has a residency at the Jazz Standard throughout the week. Argue’s band has never toured to California, and Schneider’s only plays in big venues and festivals out here. So I’m looking forward to hearing these two bands in New York clubs later this week! Friends in the Boston area will have a chance to check out the band in a few months at the Regattabar on February 25.

This entry was posted in Jazz. Bookmark the permalink.