MIT’s Lipchitz Courtyard – Then and Now 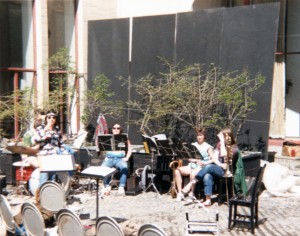 The MIT Libraries News blog had a nice article on some recent work done on the Lipchitz Courtyard within Building 14. The MIT Lewis Music Library and the Hayden Library are both on this courtyard. The replanted flower beds and planters and the new patio umbrellas all sound good. In the urban environment at Cambridge and MIT, these types of improvements are much appreciated.

But back in the day, the Lipchitz Courtyard had other uses. At least for one spring weekend in 1987, it became a theatrical venue! MIT students put on a production of Hair there, without the nude scene.

This was one of my last pit orchestra gigs. Having gotten out of the pit earlier that year for an onstage brass appearance during Iolanthe, I would soon start singing lessons. But here I am as an alumnus trumpeter in the pit band, second to the left in the picture. Everyone else in this picture was an MIT freshman or sophomore at the time; that’s the music director on the left. The photographer played percussion and was a junior.

I believe this was a totally student-initiated and student-run project. The trumpet parts in the show are fun and I recall that it was a pretty good performance. There’s a fine recording of last year’s Broadway production, and the soundtrack from Milos Forman’s movie is excellent too.

The sad thing, though, is that there still is no good performance space for musical theater at MIT. The amphitheater next to the Stata Center looks promising for this type of outdoor production, but I don’t know if it is being used that way. This may have been a one-shot for the Lipchitz Courtyard as well. Nobody at the music library could recall any such performances in recent years.

This entry was posted in MIT, Music, Theater. Bookmark the permalink.