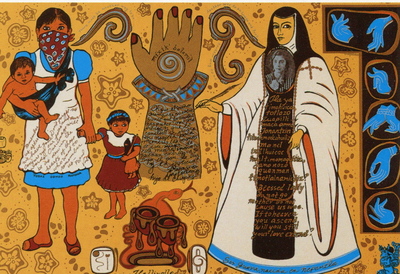 It’s December, and performances of Handel’s Messiah (plus the occasional Judas Maccabeus) are heard throughout the world. When it comes to Christmas oratorios, though, my favorite is John Adams’ masterpiece El Niño.

As with other modern-day oratorios, El Niño mixes Biblical texts with other poetic sources that comment on and develop the story. El Niño is not just about Christmas, but also about birth and powerful change. Particularly noteworthy is the inclusion of the female perspective, including key movements set to the poems of Mexican poets Rosario Castellanos and Sor Juana Inés de la Cruz.

The San Francisco Symphony was a co-commissioner of this work, and I have been lucky enough to hear it twice. The first time was at the US premiere in San Francisco; Kent Nagano conducted with soloists Dawn Upshaw, Lorraine Hunt Lieberson, and Willard White. This was with Peter Sellars’ semi-staging and film. The performances and staging were great, but like many others I found the film to be a distraction. The second time was a concert performance at the Boston Symphony with David Robertson conducting – no staging, no film. These were also fine performances, but here I missed the staging if not the film.

I am incredibly thrilled to be singing with the San Francisco Symphony Chorus in our performances of El Niño on December 2, 3, and 4, conducted by John Adams himself. These performances should have the best of both worlds – a new semi-staging by director Kevin Newbury, but no film to pull focus from the performers. Tickets are available online. John Adams has also blogged about these performances, with more updates promised.

Several of the original solo performers return, including Dawn Upshaw (on Thursday and Saturday) plus the amazing Three Countertenors: Daniel Bubeck, Brian Cummings, and Steven Rickards. The other soloists are Michelle DeYoung, Jonathan Lemalu, and Jessica Rivera (on Friday). It’s a trememdous cast whichever night you go! I know at least one friend who is coming both Friday and Saturday to hear both sopranos. The San Francisco Girls Chorus performs in the beautiful, haunting finale.

I blogged earlier about meeting John Adams at this year’s Cabrillo Festival and having him tell me “I write pretty high for tenors.” I can now verify this from personal experience! Mr. Adams really likes the high A for tenors. There is indeed a lot of high writing, usually in the loud climactic sections where the high range really helps to cut through the orchestra. All the parts are rangy though, not just the tenors. It’s effective writing: there are generally enough rests to get your strength and breath back for the high tessitura, and the sound that the audience hears is just glorious.

I’ll be in my usual spot in the third row of the chorus, towards the center. In this concert I’m a “border person” singing next to the altos. That’s always fun, but particularly in this work given the outstanding writing for altos, often in tremendous counterpoint to what we’re doing in the tenors.