Our first concert in Beijing on July 1 was in the Great Hall of the People. This is a huge space, so the combined orchestras and choruses were amplified. It was the opening concert of the pre-Olympics China International Youth Arts Festival. The chorus sang Zhou Long’s Cosmic Flames and the finale to Beethoven’s Ninth. 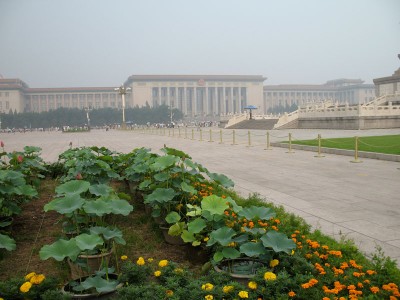 This was our largest but least attentive audience of the tour. However, our encore of Chinese song Mo Li Hua (used by Puccini in Turandot) was the biggest hit of the night. It got applause both when the sopranos started the melody and then when the tenors did the second entrance of the melody. I sing first tenor in the chorus, and the tenor section thought that any audience that would enthusiastically applaud a tenor entrance was all right with us!

However, the musical highlight of the Beijing part of the tour was our two nights of performing Carmina Burana with the Jin Xing Dance Theatre in the Opera Hall at the National Centre for the Performing Arts, commonly known as The Egg. We had collaborated with Jin Xing on the same program at Stanford’s Memorial Auditorium in April for the company’s United States debut. It was such a joy to do this again in such a fine, large theater.

The Egg looks like that – an egg surrounded by a moat (so it’s sometimes a boiling egg). It is a stunning building. Here we are going into the performer’s entrance in the back:

To enter the hall you pass under the moat. During the daytime this creates wonderful wave patterns on the walls and floor: 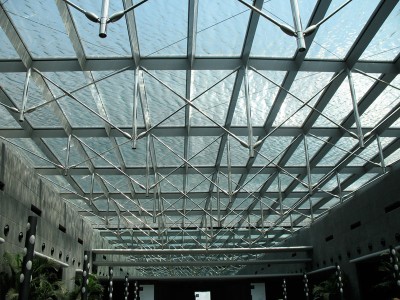 The inside is also beautiful. In this shot you can see that it is next door to the Great Hall of the People: 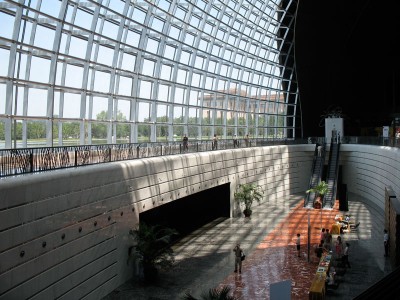 This was Jin Xing’s first performance in such a large theater in Beijing. The first half of the program included two other popular dances from the Jin Xing repertoire. Half Dream had Chen Xi performing the Butterfly Lovers Concerto with the Stanford Symphony Orchestra. Red and Black was performed to a recording of drum music. The chorus was at the back of the opera theater stage, but we could still hear ourselves remarkably well.

Neither JoAnn nor I had been on a concert tour since our student days at MIT, where we both went on several week-long MIT Concert Band tours over the years. I also toured with the MIT Symphony Orchestra to Kennedy Center and Lincoln Center, and with the MIT Festival Jazz Ensemble to the Notre Dame Collegiate Jazz Festival. Besides being a lot of fun, those tours always made the ensemble perform so much better. You get to rehearse and perform with much more intensity than normal, away from the pressures of the rest of your student (or professional) life. The same thing happened with the orchestra and chorus: the quality of the performances rose dramatically during the course of the tour.

When I was an MIT student I had just missed the legendary European tours: the Festival Jazz Ensemble was one of the first three college bands from the USA to perform at the Montreux Jazz Festival, and the Symphony Orchestra also did a European tour. It was such a privilege to be able to participate in what I am sure will be become a legendary tour in Stanford music history.