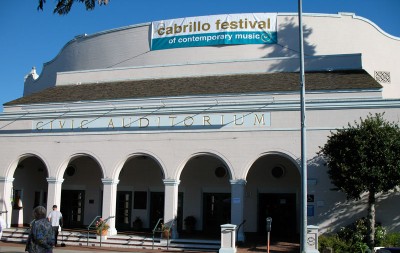 August in Silicon Valley means that it’s time for the Cabrillo Festival of Contemporary Music over the hill in Santa Cruz. This is an amazing two-week festival of contemporary orchestral music. Since 1992, the brilliant Marin Alsop has been the music director and conductor. Marin excels in both roles. She chooses very high-quality programs full of communicative music, then conducts them to provide the maximum impact possible on first hearing.

Key to the programming is the balance between composers new to the festival, and probably new to most listeners, combined with in-depth explorations of the music of particular favorite composers. Opening night at Cabrillo 2008 was a perfect example. The first half contained music be Stephen McNeff, Eric Lindsay, and David Sanford – all making their first appearance at the festival, and all new composers to me. The second half featured the world premiere of the Concerto for Orchestra by festival favorite Christopher Rouse. Rouse’s music is near and dear to Alsop’s heart – so much so that the festival has played all his orchestral works so they had to commission something new. Marin also wanted a piece from Chris that was written specifically for her, that she can take as a calling card to other orchestras to introduce them to his music.

As usual for Cabrillo concerts, all four works were well worth hearing, but some made a stronger impression than others. For me, the two highlights were Lindsay’s Darkness Made Visible and the Rouse Concerto. Lindsay’s piece had a novel premise. To quote from the program notes, it is a collision, then merger, of “two opposing musical forces: one angular, aggressive and disjointed; the other conservative, predictable, and harkening back to Lisztian bravura.” The merger phase is particularly interesting as “the tenor of the rest of the piece is shaped by the high-stakes race between which type of music will retain the most identity in the ultimate synthesis.” Three versions of the merger take place; the first two are dominated by one music or the other, while the last achieves a more blended balance.

So who has written an orchestral composition about a merger before? The piece is full of life, seriousness, and humor, and accomplishes a great deal in its roughly 10-minute length. The form of the piece is so inventive and carried off with such panache that I asked Lindsay why he was going back for his doctorate if he could already write music like this! (A great thing about Cabrillo is that you can walk up to composers at intermission and ask them questions like this.) He explained that he felt he wanted some guidance to take things to the next level. And if you’re going back to music school, Indiana University is a great place to go!

Marin has transmitted her love of Rouse’s music to us and most of the Cabrillo audience. We even traveled down to Los Angeles to hear the premiere of his Requiem last year. Both JoAnn and I thought that the Concerto for Orchestra was our favorite of Rouse’s pieces that we have heard so far. A main reason for this is that the piece is more accessible, without in any way being dumbed down.

This accessibility comes from several factors. First is the interesting form. Divided into two halves, the first half is a fast-slow-fast-slow-fast alternation. The second half then expands first the slow music and then the fast music. The end result is an interesting yet easy-to-follow form for a half-hour piece. It also provides a great balance between fast and slow music, happy and sad, light and dark – but with more emphasis on the fast and the light.

Another key factor in the accessibility is the transparency of the texture. Rouse’s music is often dense. There are lots of interesting things going on, but it can be difficult to sort them all out on first hearing. Perhaps as a result of the Concerto for Orchestra format, the music here is less dense. The contrapuntal lines are more soloistic, clearly separated, and easier to hear than is sometimes the case. The Concerto hardly reveals all its secrets on first hearing – not that I would want it to! But I felt I could grasp more of it on first hearing than in other Rouse works, and that was a good thing that made the piece communicate more directly and powerfully. JoAnn and I give this one four thumbs up, and the rest of the audience agreed with an enthusiastic ovation.

So the Festival is off to another delightful start! We will hear two more concerts this year, including John Corigliano’s Conjurer and John Adams’s Doctor Atomic Symphony in their US west coast premieres.