Coming Up: An American "Der Freischütz" 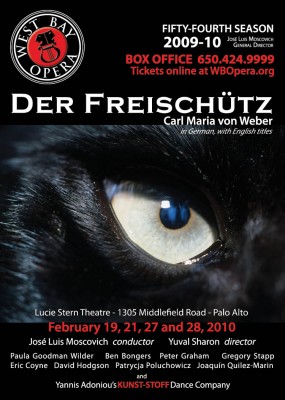 Yesterday was our first staging rehearsal for West Bay Opera‘s upcoming production of Der Freischütz. I was already excited about getting the opportunity to perform this German masterwork that is rarely done in the USA. The cast is fabulous, full of favorites from previous West Bay productions, especially from Dutchman. The chorus is as big (and strong) as you can put on the Lucie Stern stage. General director José Luis Moscovich will conduct.

There is a reason that Der Freischütz is not performed often in the USA, despite its glorious music. The work can seem a bit opaque to American audiences who don’t share the cultural context of the opera that German audiences do. How can a production make the staging more immediate and involving to American audiences, while remaining true to the work itself?

Yuval Sharon, directing at West Bay for the first time, has devised some creative ways to add some American cultural references to the staging that cleverly parallel the German references of the work. I don’t want to give away any surprises. But I will say that this production will not fall into either of the twin pitfalls of dusty museum-piece staging or been-there-done-that Eurotrash updating.

Der Freischütz will be performed on February 19, 21, 27, and 28 at the Lucie Stern Theatre in Palo Alto. The performances on Friday the 19th and Saturday the 27th start at 8:00 pm; the Sunday performances on the 21st and 28th start at 2:00 pm. Tickets are available online or at the box office.