Digital Editing Between Experiment and Standardization 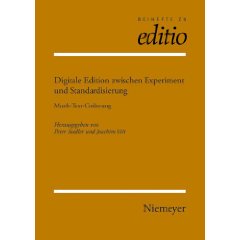 In December 2007, I participated in a conference on “Digital Editing Between Experiment and Standardization” in Paderborn, Germany. The conference focused on issues involving digital critical editions for both music and text, and was attended by many scholars and music publishers, mostly from Germany and elsewhere in central Europe.

I participated in the session on music encoding issues. Perry Roland (the inventor of MEI) and I were asked to evaluate our respective formats against a list of encoding requirements for music editorial applications. Thanks to the feedback we received from a 2006 conference in Mainz on similar issues, MusicXML 2.0 was able to meet all the representation challenges for common Western music notation. There was a lively discussion afterward, not just about the differences between MusicXML and MEI, but larger issues on the goals and use of critical editions.

The proceedings of this remarkable conference are now available! Digitale Edition zwischen Experiment und Standardisierung, edited by Peter Stadler and Joachim Veit, includes papers based on the conference presentations as well as summaries of the conference discussion sessions. It reflects the bilingual nature of the conference. Most of the chapters are in German except for the music encoding session, where the following papers are in English:

If you are interested in scholarly music notation issues, these five English-language chapters could be well worth the price of the book by themselves. At this writing it is temporarily out of stock at Amazon in the US, but in stock at Amazon in Germany.

This entry was posted in MusicXML. Bookmark the permalink.