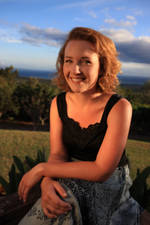 Last night we attended our first concert at the Music@Menlo Chamber Music Festival to hear mezzo-soprano Sasha Cooke sing spirituals, some of Bolcom’s Cabaret Songs, and Barber’s Op. 13 songs – the set that includes Sure on This Shining Night. This was part of the festival’s closing “Dvořák’s America” program which included Dvořák’s American Quartet and Quintet. The string playing was fine, especially in the closing Quintet, but as singers our focus was on the amazing Ms. Cooke.

The first time I heard Sasha Cooke sing was last year in the San Francisco Symphony’s semi-staged performance of Gilbert & Sullivan’s Iolanthe. Ms. Cooke had the title role and was just outstanding vocally and dramatically. She totally nailed her closing “He loves!” aria, which to me is perhaps the most single spine-tinglingly beautiful moment in the entire G&S canon. That performance had some curious amplification – much to the displeasure of the starring Lord Chancellor, Richard Suart, and perhaps other cast members as well. So I couldn’t be sure of how great she was, but I had a pretty good feeling about it.

That feeling was confirmed when my wife (also a mezzo-soprano) and I heard her sing Berlioz’s Les Nuits d’été with Michael Tilson Thomas and the San Francisco Symphony in June. I’ve heard these songs both live and on recording with some pretty famous singers, but the cycle as a whole had never really grabbed me. Individual songs like Absence are outstanding, sure, but the cycle has a lot of pretty slow songs that can blur together. Cooke made great dramatic sense of it, giving each song its own characterization and distinctiveness, but in a totally natural-sounding way. Some excellent solo singers have trouble being heard in the vastness and acoustic imperfectness of Davies, but this was no problem for Ms. Cooke at any dynamic level.

There are times when you can tell from the audience that MTT is having even more fun than usual, when a performance is just spectacularly good. This was one of those times – he was really radiating throughout the cycle. At the end during the applause, he knelt down and kissed the hem of Ms. Cooke’s gown. We’ve been subscribing to the San Francisco Symphony ever since we moved here, which was MTT’s first season with the Symphony, and we’ve never seen that before!

So the very next day we booked the tickets to last night’s Music@Menlo concert. I was thinking the Barber and Bolcom were pretty sure to be outstanding, but I was skeptical about the spirituals. Those were what opened her part of the program, and they were incredible. She was totally into the style, with the dialect and tone just right, but still with her personality. She was literally jaw-droppingly good, and demonstrated even more versatility than ever. The Bolcom songs were indeed outstanding. After intermission were the Barber songs, and perhaps it did these songs no favors to hear them after the others. I love them, but their poetic language makes them less immediately accessible to the audience than the much more vernacular spirituals and Bolcom. They are also tricky songs, and this was the only time where you could perhaps detect a little bit of singer’s calculation about getting everything just right.

But that’s in part because Ms. Cooke, unlike far too many other concert singers these days, actually learns her music by heart. I have yet to see her bring music on stage, and of course this frees her both physically and musically to really communicate with the audience. To see and hear her in a real chamber-music sized hall, seating about 120 people, was a special treat indeed.

Having heard her sing three times now in three different settings, I am really looking forward to performing with her next year! Sasha Cooke will be the mezzo-soprano soloist with the San Francisco Symphony in Mahler’s Symphony No. 2 on May 7 and 8. Tickets are available online now. I will be singing tenor in the chorus. Yes, we just performed this in March, but the Symphony will be taking it on tour next season. So we are reprising it with different soloists; Karina Gauvin will be the soprano.

The last time we heard Lorraine Hunt Lieberson sing in person was when she sang the Mahler 2 with the San Francisco Symphony in the set of concerts that led to the orchestra’s recording. Katrina Karnéus sang it fabulously in our March performances. I can’t wait to hear what the amazing Sasha Cooke will do with Urlicht and the 5th movement. Catch this wonderful singer as soon as you can. With any luck she’s just at the start of her brilliant career!

1 Response to The Amazing Sasha Cooke