The End of the Centennial Season 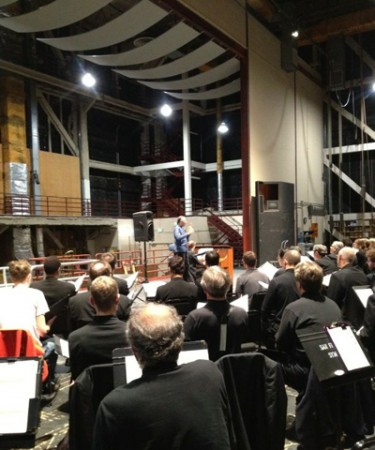 Saturday night was the last concert of the amazing San Francisco Symphony centennial season. This program was a great one for the chorus: Ligeti’s a cappella Lux aeterna, Schoenberg’s A Survivor from Warsaw, and Beethoven’s Ninth Symphony. The Beethoven was recorded for future SACD release. There’s actually one more performance of the Ninth coming up Sunday at Stern Grove, but I’ll be on my way to Minneapolis that day and will have to miss it.

Here’s a photo from Michael Tilson Thomas’s Twitter feed showing him polishing a few last details in the Beethoven before the final Saturday performance. If the space looks unusually large, that’s because of a change in our routine. Due to construction, the chorus had our pre-concert warm-ups in the huge Zellerbach A hall used by San Francisco Opera, rather than our normal, smaller home downstairs in Zellerbach C.

All four performances were sold out, which means we had some 10,000 people hearing these concerts live. We were able to bring the a cappella magic of the Ligeti to 10,000 people in 4 subscription concerts! There are tradeoffs between doing an occasional a cappella piece on a subscription concert vs. having a dedicated chorus concert during the season. In the past we did the latter but this year we did the former; the bigger audiences, especially for this concert set, seem to make it a worthy trade.

Once again, the San Francisco Symphony audiences were an absolute delight to perform for. Every night you could feel the concentration and silence during the pieces; on three of the four nights, the audience maintained that intensity all the way through the 7 bars of silence with which Ligeti closes the work. The audience really joined us on the journey from Ligeti’s eternal light, through Schoenberg’s darkness, then on the darkness to light journey of the Ninth. And at the end – especially on Friday and Saturday nights – they exploded in the loudest ovations I’ve ever heard from on stage. On Saturday night it was cool to look out at the audience and see John Adams there, even with Nixon in China being performed across the street. The concerts also received rave reviews from the San Francisco Chronicle and San Francisco Classical Voice, along with fine blog notices from Lisa Hirsch and John Marcher.

This was a great if crazy season for the chorus. I was tired enough after doing the Verdi and Brahms Requiems back to back. But most of the women did Mahler 3 just before that, and many singers did Messiah and the Christmas concerts right afterwards. Debussy’s Martyrdom of St. Sebastian was a rare treat to perform. Mason Bates’s moving Mass Transmission was the highest-profile premiere I’ve ever done, part of a fabulous revival of the American Mavericks festival.

Then in September we get to start season 101! My schedule includes Prokofiev’s Ivan the Terrible, Berlioz’s Te Deum, Poulenc’s Stabat Mater, Handel’s Ode for St. Cecilia’s Day, Beethoven’s Missa solemnis, and – if I’m lucky and they decide to use a larger chorus – Bernstein’s West Side Story. I’m looking forward to it but am enjoying the time off already.