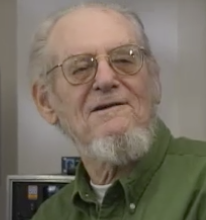 The world of music notation software has lost one of our pioneers. Leland C. Smith, creator of the SCORE music printing system, died on December 17, 2013 at his home in Palo Alto, California.

Leland had many roles in his life, including composer, Stanford professor, CCRMA researcher, bassoonist, software developer and publisher, husband, father, friend, and colleague. SCORE was his primary claim to fame in the larger musical world. First released for MS-DOS systems in 1986 after years of development, it became the first computer application that established music publishers used to produce high quality musical scores. Two of its main competitors in the 1980s and 1990s, Finale and Music Printer Plus, followed two years later.

SCORE’s parametric approach to music notation was directly modeled on the Music V family of languages, developed for computer music synthesis by Max Mathews. The first music notation software that I wrote, the Scot score translator for Music 11 and Csound, was also a direct descendant of the Music V language. So Leland and I, like so many others, are both indebted to Max for our beginnings in the music software application world. I met Leland for the first and only time nine years ago. It was at a Computer History Museum event on “Music Meets the Computer” that featured Max Mathews, John Chowning, and Curtis Roads on the panel.

Leland’s pioneering spirit and achievements will be greatly missed. While SCORE itself was largely a one-person development project, several independent developers such as Jan de Kloe and Thomas Brodhead have developed important SCORE utility programs over the years. In particular, Jan de Kloe’s programs to convert back and forth between SCORE and MusicXML files help to keep Leland’s legacy alive for the digital sheet music age.

This entry was posted in Obituary, Software. Bookmark the permalink.