The Iterative Design of a New Text Editor

Iterative design has been strongly recommended as part of a basic design philosophy for building measurably easy-to-use computer software. Iterative design was a major technique for meeting the specified usability goals for Eve, a new text editor for the VAX/VMS operating system. There was no adverse effect on the project schedule. Users’ problems followed similar patterns to those encountered in earlier laboratory experiments on operating systems.

Iterative design was used successfully in developing Eve, a new text editor for the VAX/VMS operating system built using the VAX Text Processing Utility (VAXTPU).1 Our experience in this real-world design problem showed that iterative design can be used to help meet measurable goals for ease of use without any detrimental effect on the project schedule.

Most of the suggestions for iterative refinement came early in the product development process. The suggestions reflected several different categories of interface problems which were observed earlier in laboratory experiments.

VAXTPU provides a programming language that can be used to build text editors and other applications programs which involve text manipulation. The Eve user interface was programmed entirely in the VAXTPU language, and was developed in parallel with the rest of VAXTPU. This separation between the editing “engine” and the user interface was a key component in minimizing the effect of iterative design on the entire project schedule.

The initial version of Eve was delivered on schedule for an internal version of VAXTPU released in February, 1984. Iterative testing for this first version was confined to laboratory testing of the editor with seven novice users for ease of learning. The tests resulted in minor changes to the basic Eve keypad commands.

More extensive iterative design started in February when Digital employees began to use the Eve interface for their daily text editing. The first users of the early versions were colleagues in our research group. By the middle of April, another version was ready for more widespread distribution throughout Digital. Interested users obtained the editor via Digital’s DECnet network, testing Eve and VAXTPU in Digital facilities through out the world.

Throughout the development process, we collected suggestions based on users’ experiences with Eve and used the suggestions to improve the editor. However, there was a complete version available at any time after the initial version was produced, in case the schedule was shortened for an earlier product release. Field test for VAXTPU began in August and ended in February, 1985. Field test for the updated version of the VAX/VMS operating system began in May, 1985 and ended one month later. 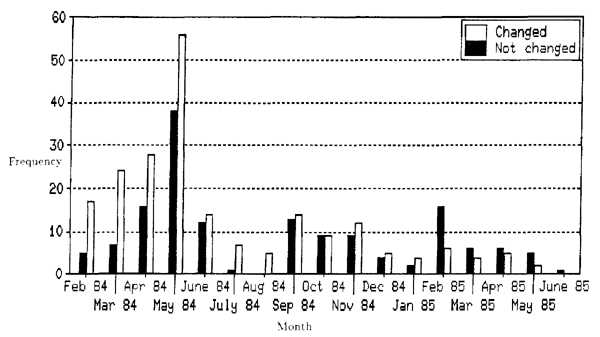 Table 1 shows the differences between changes made before and during field test. Overall, 362 specific suggestions for improving Eve were received from 75 different users. Most of these suggestions. including those made during field test, came from Digital employees.

Table 1: Suggestions Before and During Field Test

Whiteside, Jones. Levy, and Wixon (1985) described five categories of interface problems which they observed while running laboratory experiments with 165 users on 11 different operating systems, including command, menu, and iconic interfaces. These problems — usefulness of help systems, system feedback, naturalness of input forms, consistency of input forms, and navigation through the system — appeared in each of the three styles of interface.

During Eve’s iterative design, each of the 362 suggestions received was placed into one of these five categories, or into two new categories: one for missing functionality, and another for system failure. Table 2 shows the percentage of Eve suggestions present in each category. The most frequent categories were usefulness of help systems and system feedback, each accounting for 22 to 23% of the suggestions.

What are some examples of suggestions in each of these categories? Usefulness of help systems included suggestions for improving the wording of particular help or error messages that users found to be confusing. System feedback included several suggestions for changing where the current editing position was placed on the screen after commands were completed. Naturalness of input forms included suggestions for faster movement to the beginning and end of lines. Inconsistency of input forms included a problem in which Eve help command did not accept the same command abbreviations that were accepted in the rest of the editor. Missing functionality included requests for new features. Navigation through the system included a problem in which users who were exploring certain system status areas could not return to their original document. System failure included reports of infinite loops and access violations which stopped the editor from running.

Figure 2 shows what proportion of suggestions in each category were incorporated into Eve. Most of the suggestions in the categories of usefulness of help systems, system feedback, consistency of input forms, and system failure were incorporated into Eve. The less frequent implementation of suggestions in the categories of naturalness of input forms, missing functionality, and navigation through the system reflects that many of these suggestions would require adding new commands or new features to the editor. These types of suggestions were tempered by data on actual text editor usage (Good, 1985) and by a design goal of avoiding unnecessary complexity in the editor interface. 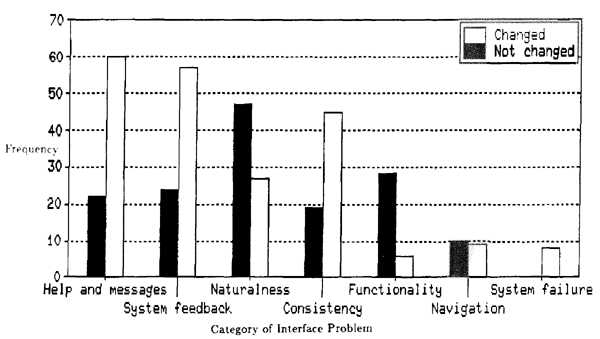 Iterative design was used successfully in the design of the user interface of a new text editor for the VAX/VMS operating system. Iterative design was one of several tools used to ensure that the new interface met its specified, measurable goals for ease of learning and speed of use, without any adverse effect on the product schedule. Most of the problems reported by editor users in field conditions during the iterative design process fell into the same categories as problems reported in laboratory experiments of operating system interfaces. These results are encouraging for developing both improved products and improved understanding of problems in user-computer interaction.

1VAX, VMS, and DECnet are trademarks of Digital Equipment Corporation.