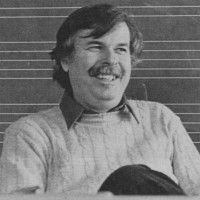 Herb Pomeroy directed jazz bands at MIT from 1963 to 1985. He was the founder of the MIT Festival Jazz Ensemble, one of the first three collegiate bands from the USA to perform at the prestigious Montreux Jazz Festival. He was a fine trumpeter and a great bandleader, but his largest legacy may be as a teacher at the Berklee College of Music. His line writing class at Berklee was legendary, and he gave a short synopsis of some of the key points of writing and orchestration in the first of his Music at MIT Oral History interviews on December 14, 1999. This happened when Forrest Larson asked a great follow-up question about some of the musical values that Herb had learned when studying at Schillinger House:

Well this fellow, Richard Bobbitt, who was the dean, he had studied with Stefan Wolpe. I hope my memory is accurate. Bobbitt learned from studying with Wolpe about voicing not through choosing notes because they are the root, the 3rd, the 5th, the 7th, the 9th, but making most – I don’t want to say all – most of the vertical structures structures that are created because of the intervallic relationship between the notes, not because they are a function… So, certain intervals – you know, there are consonances, there are dissonances. If we want to get richer, or we want to get darker, or we want to get brighter, the choice of interval between notes is more important than the function that the note is in the chord.

Which will also – I sort of based a whole course on this later on, when I started to teach – also will take away from the obviousness of the chords that have the root in the bass, from the chords that have the 3 – 7 tritone that announce “I am this chord” and there’s very little you can do about it. Instead of taking the notes because they are these very important – vitally important in certain areas of sound. But if you’re looking to broaden, whether you’re a classical composer or a jazz composer – this approach to intervallic choice of notes rather than function choice of notes I got originally from Bobbitt… I learned a great deal from this man about this, the intervallic approach to vertical writing as opposed to the function.

Even then I was saying to myself, “This is going to be valuable.” I tell you, so many students that I had at Berklee, and I don’t mean to wave the flag here, have come back to me – two, five, ten years after, not while they’re taking the course, after they’ve absorbed it – and said that this course was one of the most opening things that they studied in a school or classroom situation…

Most jazz ensembles – whether they be three or four horns and a rhythm section or a whole band – the instrumental sound is pretty similar. I don’t mean the harmonic sound. I don’t mean the style of the player’s vibrato. The purely instrumental sound when you hear whether it’s 4 horns in like an octet or you hear the 12, 13 horns of a full jazz orchestra – the instrumental sound, the layered effect of color of trumpets, color of trombones, color of saxes in this function kind of harmony that we’re talking about – is the same. Whether you listen to Basie of ’35, or you listen to Woody of ’54, or you kind of listen to Mel and Thad of ’85 – whichever of these bands. Nothing to do with rhythmic style, harmonic style, era – was it swing, was it bebop, was it whatever. This layered, as I call the layer-lit colors, each layer really separated from each other, not entwined like this getting a richer sound instrumentally, is the same.

Whereas if you use this non-function, this intervallic work, and put the instruments together so you rub color against color – put a reed between two brass, rather than put four brass and then four trombones and then five saxes, or maybe one or two overlapping – but I can hear a typical big band and it almost sounds like there are just the three primary colors, so to speak. I don’t hear any sense of rainbow effect going on there. So these are some of the things that I learned from these teachers which were not jazz tools, but they were music tools.

I knew then, and in hindsight I even thanked them even more. Because so many students – I mean, I’ve had many people who are professional writers in their home lands, directors of radio / TV studio bands, conductors of symphony groups who wanted to get into the jazz thing, leaders of big bands all over Europe, who came and studied at Berklee and would take this course. And I could watch, I could see in their faces while I was saying these things, I could see these looks, this opening. That was very gratifying, to know that you had…

I did not invent this, I merely organized the thinking. People say “oh, you created it.” No! Maybe that mathematical mind from back in my teens and all that allowed me to organize. When you teach as long as I did, and stand in front of the thousands and thousands, literally, hours I have stood in front of bands and rehearsed them, and developed an eye-ear relationship. I do not have a God-given eye-ear relationship; I have a developed eye-ear – see the score and hear it in my head. The number of hours that I was able to do that – and I feel very blessed with my own professional band, with the Berklee band, and with the MIT band, and then clinics all around the country and the world and all that – I don’t think it’s exaggerating to say it’s thousands of hours that I’ve stood there and heard it and seen it. It’s allowed me to perceive things about scoring techniques for jazz orchestras that I don’t think many people have had the opportunity to know.

The only person that I’ve been able to have a close association with who – we’ve talked about it some, but I just knew it from observing him – was Bob Brookmeyer. I think Brook has this same sort of ability, and he’s a marvelous writer.

I don’t know what kind of thoughts and things Gil Evans had in his head. I don’t know about Duke – I tried to find out from Duke, I played with the band and would question him. (Laughing) He’d be terrible – I’d say, if we were in a room and it was casual, I’d say “Duke, come here – on this tune, in the first two measures you do this”, and I’d play on the piano, “but I can’t figure out what you do in the next two measures.” And he’d say, “Oh, you’re doing it better than I could do it anyway” and just walk away. He wouldn’t show me anything!

Please note that I transcribed this interview excerpt. Any errors are mine, not the MIT Lewis Music Library’s. The library is working on officially transcribing the interviews. Hopefully the first transcripts will be available sometime next year.