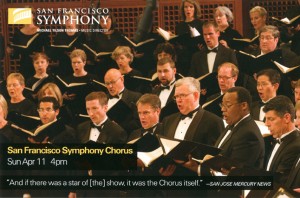 The combination of work and chorus rehearsals has kept me from this blog. But I really need to let you know about Sunday’s San Francisco Symphony Chorus concert conducted by Ragnar Bohlin, just 16 hours from now.

This is the chorus’s annual concert without the orchestra – a mixture of a capella works, works for chorus and piano, and works for chorus and a small number of instruments. Some works call for a smaller chamber chorus, others for a larger group, so there is a diversity of both choral and instrumental textures throughout the program.

This year’s concert features a lot of music that is new to most people in both the chorus and the audience. The first half is a selection of Swedish music, made possible through a grant from the Barbro Osher Pro Suecia Foundation. The concert starts with the premiere of Fredrik Sixten’s Let There Be, commissioned by the San Francisco Symphony. The chamber chorus sings this, so I’ll be hearing it for the first time at the concert. The first half continues with Ludvig Norman’s Jordens oro viker, Ingvar Lidholm’s … a riveder le stelle, Sven-Eric Johanson’s Fancies II, and concluding with Two Folksongs set by Lars Edlund. The second half of the program starts with selections from Rachmaninoff’s Vespers sung by chamber chorus, and concludes with the organ / harp / percussion version of Bernstein’s Chichester Psalms.

Of the Swedish pieces that the full chorus is singing, I think the Lidholm is the clear-cut standout. It’s also the one piece on the first half that the SFS Chorus has sung before. A setting of the final lines of Dante’s Inferno, it captures Dante and Virgil’s ascent back to the world of light “to behold once again the stars”. The work is a tour-de-force of 20th century choral writing. The soprano, tenor, and bass sections sometimes have 8-way divisions (the altos, alas, just 4-way), and at any one point in the score there may be 16 independent lines throughout the chorus. This is used for many effects: tone clusters and dissonant harmony depicting the Hellish scenario, great bitonal washes of sound, moving toward a gorgeously consonant conclusion as the journey ends.

This score is also a textbook example of how to write dissonant counterpoint for a chorus. In the Music at MIT Oral History interviews, John Bavicchi expounded on this very topic – which he is quite expert on as both a composer and chorus conductor. The techniques that Bavicchi describes are just what you hear used in the Lidholm – such as starting with a unison / consonance and going from there to the more dissonant material. I hope to blog about this in more detail in a future post.

It should be an exciting program full of new discoveries plus some more familiar favorites. The concert is at 4:00 pm on Sunday, April 11 at Davies Symphony Hall. Tickets are $20 and $30 and will be available at the box office starting at 2:00 pm.

And then after one day off, rehearsals start on Tuesday for Ravel’s Daphnis et Chloé, with Michael Tilson Thomas conducting. The professional choristers will also be singing Stravinsky’s Threni on the first half of the program. Performances will be May 19, 20, 21, and 23 at Davies Symphony Hall.