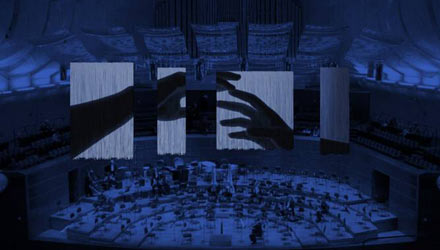 If you’re in San Francisco this weekend and love Debussy, you really should try to get to see and hear our production of Le martyre de Saint Sébastien at the San Francisco Symphony. We’re doing the full incidental music in a semi-staged production. The work becomes a multi-media pageant complete with narrator, soloists, chorus, and orchestra.

If you’ve seen SFS semi-staged productions before, you know they can make remarkable use of the Davies Symphony Hall space. You can see the projections in the publicity photo above, but there’s more to the staging than that. Anne Patterson is the director and designer; Michael Tilson Thomas is the conductor; Frederica von Stade is the narrator. Our vocal soloists are sopranos Karina Gauvin and Joanna Taber, and mezzo-sopranos Sasha Cooke and Leah Wool. Sasha and Leah sing a duet as twins at the beginning, from opposite sides of the stage, that is simply amazing.

The chorus doesn’t have a lot to sing in this work, but what we do sing is choice. This is Debussy in full impressionistic, romantic, whole tone glory. Because this was written as incidental music – a bit over an hour of music for a big five-act play – the narration and production provide some essential dramatic context to bring the work to life in a concert setting.

Another real treat for the chorus is that the staging brings the soloists up to our level. Usually the soloists for an orchestral work are front and center on stage, while we’re up in the center terrace quite far away. In this staging, though, Flicka is maybe 20 feet to my left, while Karina and Leah are maybe 10 feet in front of me; Sasha is on the other side of the stage. I was having a lot of fun drinking in their presence at tonight’s tech rehearsal.

Le martyre de Saint Sébastien was composed and premiered in 1911, the same year that the San Francisco Symphony started. So these performances really fit into the ongoing SFS Centennial celebration season. It’s rarely done, and MTT is one of its major champions today. The concerts start with Leoš Janáček’s Sinfonietta. Don’t miss it!

Performances are Thursday, January 12 through Saturday, January 14 at Davies Symphony Hall. Tickets are still available, though getting pretty scarce for Saturday.