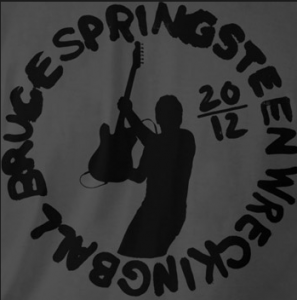 Thirty-four years ago, I went to see my first Bruce Springsteen show – December 30, 1978 at Cobo Arena in Detroit, way up in the nosebleed seats. At this point I had a couple of his albums, Born to Run and Darkness on the Edge of Town, but I was a casual fan. Well, I lucked into seeing Bruce on one of the most legendary rock tours of all time. I was an instant convert! That date remains the best rock concert I’ve even been to, the one that moved and inspired me the most deeply.

But wow, Bruce’s concert last night in Oakland sure comes close. I’ve seen Springsteen several times in the years in between, including on tours for Human Touch / Lucky Town, The Rising, and Working on a Dream. All have been top-notch, but this went a step above.

I was wondering how this would all come off at first. The loss of Danny Federici before the Working on a Dream tour was sad enough. But the loss of the Big Man, Clarence Clemons, would have far more impact on the stage show. The Big Man and Miami Steve Van Zandt had been Bruce’s main foils on stage. How much would this feel of a “band of brothers” (and more recently sisters) translate with more and more new people in the band?

Naturally the Big Man was irreplaceable, so Bruce went with something way different. He came on stage with a 16-piece ensemble! There were 8 in the E Street Band, 5 in the E Street Horns, and 3 in the E Street Choir. With the voices, a full horn section, a violin, 3 guitars, 2 keyboards, bass, drums, and percussion, the 17 people on stage could provide just about any timbres and feel you could want in a rock concert. Darcy James Argue calls his big band steampunk because the need for big bands really went away with the advent of amplification. Though the need was gone away, the desire remains – some people still crave the sound of a jazz big band. Well, the same rings true here for this rock and roll big band.

Four things in this concert stood out in particular in terms of why the night was so moving for me, beyond the thrills and ecstatic feelings one has come to expect from a Springsteen concert:

So it was an amazing night – I’m still on overdrive from it twelve hours later. This leg of the tour is almost over, but I know they’re continuing in the summer over in Europe. And if you think I’m exaggerating about the 1978 tour, the box set The Promise includes a video from a show just three weeks before the one I saw. I had to get that box set to make sure I wasn’t dreaming that the concert was that great. I wasn’t; it was. I sure hope someone has been recording this tour, because a live album/video from it would be a great thing indeed.