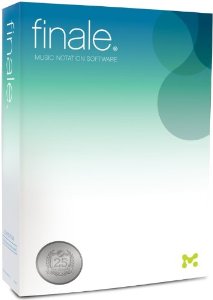 On November 4, MakeMusic released Finale 2014, the latest update to our flagship music notation software. The first version of Finale was released 25 years ago, and you can now see a promotional video for Finale 1.0 on YouTube. Many notation software products have come and gone over the past 25 years, but Finale and MakeMusic are still here, delivering top-notch professional music notation to our customers.

MusicXML works very well as an interchange format, but it is software-agnostic. Any program that uses music notation has its own ways of representing music that is optimized for how that application works. So while MusicXML transfers could give high fidelity for how the music looks and sounds, it could not transfer exactly how this was done in Finale. MusicXML export from Finale also includes more formatting than what is supported in MusicXML import into Finale, so formatting details would also be lost.

Finale’s old file format dated from the days when disk space and CPU time were scarce commodities. It was optimized for space and time efficiency at the expense of not being able to read files from newer versions. Times have changed, and full forward and backward compatibility has long been one of the most frequent Finale feature requests. Finale 2014 now delivers this to our customers.

Of course, if we just claimed that our format was now forward and backward compatible in Finale 2014, how would customers know? Would they have to wait until the next version of Finale is released? We knew we had to demonstrate this technology in action and give customers the benefits of compatibility now, not later. So we used the same extensible file format technology to offer an option to export back to Finale 2012. The export feature uses the same techniques we will use to read files from newer versions into Finale 2014. It just needed to add the extra step of converting the file back into the old Finale 2012 format.

Theoretically we could have done the same thing to export to even older versions of Finale. Practically, though, this would have been a much larger effort because of the changes between Finale 2011 and 2012 to add Unicode support. Rather than take away development time from other new features in Finale 2014, we decided to restrict the export to older versions to Finale 2012.

Since I joined MakeMusic two years ago as part of the Recordare asset acquisition, most of my time has been spent architecting and co-implementing the new file format. It is most gratifying to finally get this out to our customers and see the positive reactions to our efforts.